Are you tired of staying at home and looking for a reason to go outside? Take a stroll throughout Santa Cruz and discover these local art pieces that illustrate the city’s rich history and culture. Not only are they free to view, but they also allow you to enjoy Santa Cruz’s beautiful weather and learn about the people who have made this small beach town such a great place. 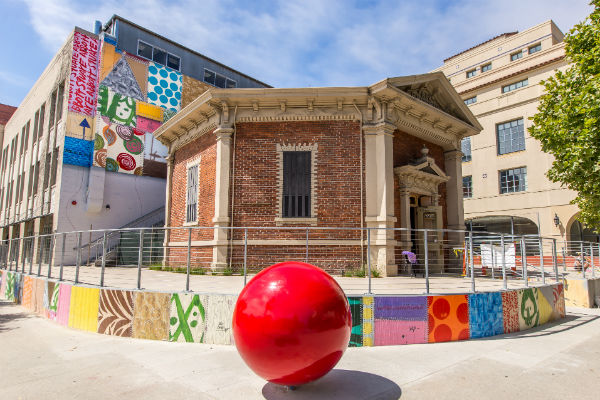 Created by Bonny Doon artist, Thomas Campbell, this mural wraps around Abbott Plaza and the Museum of Art and History with a virtual quilt of colors, textiles, and references to the Santa Cruz community. This mural embodies the spirit of Abbot Square as a place where friends, family, and strangers can come together over food, art, and play. To view more great art, just take a few steps from the mural and step inside the Museum of Art and History.

Located in the Beach Flats neighborhood, this 190-foot long mural depicts the history and growth of the Beach Flats community. During its production, individuals of all ages were encouraged to contribute to the mural, creating a sense of community and shared storytelling. The mural is separated into 7 panels depicting images of actual community members, vibrant colors, and cultural traditions. Learn more about the mural here.

Located outside of Old School shoes, the “Surfin Bird” mural depicts scenes from Santa Cruz Life such as surfing, the Boardwalk, and sunbathing on the beach. Artist Brian Barnecolo transformed what once was a dull, brown wall into a bright and lively mural mixing styles of Pablo Picasso and graffiti.

Located at the Louden Nelson Community Center, this mural highlights the issues, themes, and experiences that influence LGBT youth today. The focal point of the mural is the bridge of “intersectionality” which connects the success of various movements involving LGBT liberation, racial equity, immigration rights, indigenous sovereignty, and the end of patriarchal violence. This mural presents the past, present, and future of marginalized communities that were once overlooked and are now evolving in a thriving world.

“Bay in a Bottle”

Painted by John Pugh as a metaphor to idealism, “Bay in a Bottle” is a 90-foot mural illustrating the ocean in a long, clear tube, being monitored by a scientist. The scientist depicted is Spanish explorer, Sebastian Vizcaino, who gazed upon the Monterey Bay back in 1602. Commissioned by Shopper’s Corner and the Santa Cruz Redevelopment Agency, this mural evokes the city’s natural beauty by a technique that Pugh is famous for called, “trompe l”oeil,” which is used when two-dimensional images appear to be three-dimensional.

At 500 feet long, this is the largest mural in Santa Cruz history. You can’t miss these breathtaking illustrations of ocean life while driving or walking near Bay Avenue and Mission Street. Raising awareness around the health of our oceans and global plastic pollution, this mural was organized by local artist Taylor Reinhold, who is part of Fresh Walls Project, a small group of artists who focus on projects involving community and environmental sustainability.

The Wharf Road mural was first completed in 2010 and then extended in 2015 for the City of Capitola with cascading begonias and depictions of modern people looking upon Capitola Beach. Selected by The Capitola Art and Cultural Commission, artists John Ton and Maia Negre created a mural that brought color and life to a blank cement wall as well as created another beautiful attraction to the city of Capitola.

Are there any other art murals you enjoy visiting? Any hidden gems that weren’t listed here? Leave a comment below and let us know!

Always Here For You

Being your trusted advisor is a privilege. That's why I do business in person from start to finish. 1108 Mission Street, Santa Cruz, CA 95060